One of my all-time favorite quotes is one from the late Robert McCloskey and it goes like this: 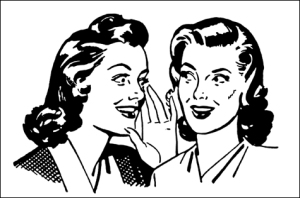 After some suburban mama drama I went through this week I quickly realized that not only lack of communication was to blame, but miscommunication also.  People take what they hear as fact when it should be labeled more accurately as hearsay or fiction in some cases.  This was one of those cases.

It is like that kids game of telephone where the phrase passes from child to child and eventually turns into something all together different in the end.  The only difference is we are well into our thirties and we should have left this silliness where it belongs, back in high school.

My refusal to take part in the infantile behavior only made things worse when it was taken as fear instead of disdain as it clearly (at least to me) was.   Actually, the only thing I fear about this matter is becoming one of those people who actually give a shit who said what about who.  As for now I will take solace in the fact that I have avoided becoming a willing participant in the suburban mama drama, for now.